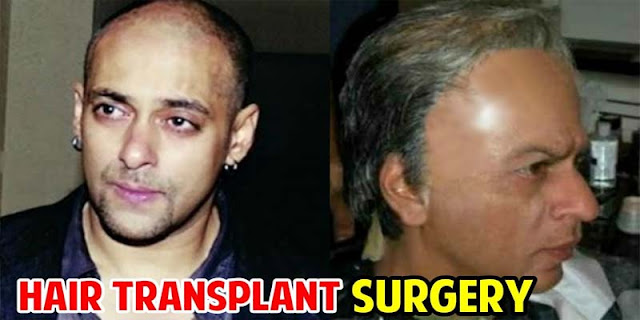 Here is the top 12 Bollywood Actors who went for Hair Transplant Surgery,

Bollywood megastar Amitabh Bachchan was very wise to do it way before people saw him balding but we realize that he has the most natural hair transplant.

Salman Khan did hair surgery many times for this treatment to get various looks for his characters in the movies. He went to Dubai to get his hair transplant procedure done.

Akshay Kumar faced hair problems when he was 40. Over hair falling problem he did his hair transplant surgery.

Govina also gone through hair transplant surgery. He has suffering for damage hair and already he lost many film for this hair problem

Bollywood actor Sanjay Dutt was suffering from baldness badly. He also underwent a strip procedure many years back from United states of America.

Akshay Khanna has already under grow his hair also, But he did this secretly. No one even know he had hair problem.

This famous Indian comedy king has to do hair transplant to get new and young look. His latest hair system suits his personality very well.

One of the most talented singer Himesh Reshammiya was undergrow his hair couple of years ago, Now we see him flaunting those silky, smooth hair.

Vivek Oberoi did his hair transplant treatment also and also got the results amazing.Now Vivek has silky long hair.