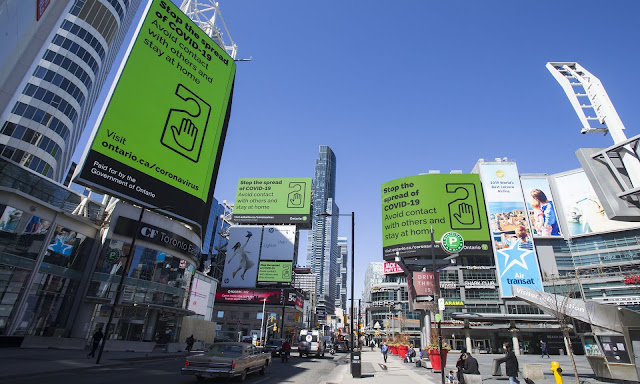 Health officials in Ontario have warned that as many as 15,000 will die from the coronavirus in Canada’s most populous province in the coming months, but said extreme measures already in place have probably saved many more lives.The province released its coronavirus projections on Friday, as it prepares for a surge in cases that could overwhelm the province’s already-strained healthcare system.“These number are stark, and they are sobering,” said the premier, Doug Ford. “But these forecasts are projections. And they can change with your actions and the government’s actions.”In recent weeks, Ontario, like all provinces, has closed non-essential businesses, schools, public spaces and parks to blunt the spread of the coronavirus. But the number of cases continues to grow at a rate that has alarmed public health officials.Provincial health experts said as many as 100,000 Ontario residents could have died over the course of the pandemic had the province not taken early measures. As many as 6,000 people would have in April alone.With current measures – including limiting public gatherings and asking people to stay home – officials hope to keep the total death toll between 3,000 to 15,000 over the course of the pandemic, which they say could last as long as two years.Officials expect as many as 80,000 people will become infected in April with 1,600 deaths.“Where we end up depends on all of us … I appreciate, to many people, these are shocking figures,” said Dr Peter Donnelly, head of public health in Ontario during a technical briefing before Ford’s remarks. “These are truly, truly unprecedented times.”By Friday, Ontario had recorded 3,255 cases of the coronavirus and 67 deaths. Of those, 20 come from a single retirement home in the town of Bobcaygeon, north of Toronto.The numbers of those infected in the province are probably much higher than the recorded figures, cautioned experts, and the province needs to do far more testing to obtain an accurate picture of the spread of the virus.Ford’s call for greater transparency in modelling and projections came as the prime minister, Justin Trudeau, cited a need for more and better data before his government could release nationwide projections.“People are wondering how much longer this is going to last,” Trudeau said on Friday. “We need a better grasp on the accuracy of the data before we put projections out there.”Donald Trump released projections guiding decision-making at the White House last week, suggesting as many as 240,000 Americans could die with current pubic health measures in place.Toronto, Canada’s most populous city, is likely to sustain the worst damage in the country by sheer volume, say officials. Given the potential loss of life to the city, municipal staff have grown increasingly frustrated as residents flout calls to stay home and maintain physical distance in public.“Lives are potentially at stake and we’ll turn up the heat,” Mayor John Tory said on Thursday, announcing a “blitz” in enforcement measures that would see residents face fines of up to C$5,000 (US$3,500) for failing to maintain two meters of physical distance in public spaces. “We will continue to do everything we can as a municipal government to lock down the city to save lives.”While Ontario is the first to release projections with hard numbers, British Columbia released its modelling last week, providing estimates on the anticipated need for ventilators and ICU beds in hospitals – and told the public it was confident the province had sufficient capacity.Quebec, which has 6,101 recorded cases – the most in the country – pledged to release its models on Tuesday.As of Friday, after testing more than 290,000 people, Canada has at least 11,747 cases of the coronavirus and 152 deaths.Source: theguardian.com
By Rameez Ali Ansari at May 20, 2020